Just a quick update John has to have a colonoscopy for further investigation-Helen had a mammogram and a scan ---was then given the ALL CLEAR thank goodness what a weight off all our minds and hers -apparently she just has lumpy boobs but all harmless -there was a name for it but can't remember what was said after the all clear comment!!!Thank you again for all your lovely comments,emails and support-much appreciated when at a low ebb so thank you.

I made some artist trading coins for a FB forum swap-we swap trading coins,ATC,tags and postcards-the same group who are doing the round robin stamp swap too-i am afraid I haven't made anything for this months swap---well I did make these but cannot for the life of me find them at least I have a pic lol.
I used Distress Oxide through a TH stencil onto black cardstock cut with a scalloped circle die from The Works,I stamped the image(a craft mag freebie)and heat embossed the cactus section then stamped the pot section again onto embossed kraft card and swiped with distress ink. 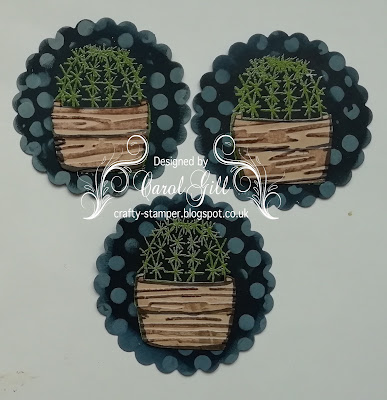 Morning and I have a journal page for my GDT inspirational mid-way challenge post at Try It On Tuesday were the challenge is "In my garden there is....".
THe bird stamp is IndigoBlu,Chocolate Baroque Bee stamp-stitched circle dies from The Works,B.paper/paper Butterfly and pearl from stash,I also recently added the feather which was a craft mag freebie stamp and have a few ideas to maybe add other stuff when I get round to it-WIP as you might say lol. 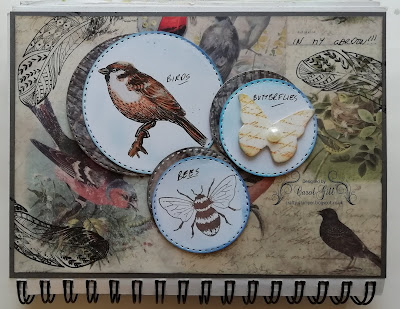 I have an ATC set to share which was made for a stamp swap on a FB forum -it started a few months ago and a bit like a round Robin we all send a stamp to someone in the group and they all go round till you get yours back again and we have to share what we made so not sure what make the stamp is.The stamp is Curly Bird from purple Onion Designs.
I stamped the image onto the ATC card then stamped again on book pages-then once again on oddments of a shaving foam technique used on another project,faux stitching round the edges then my fave texture stamp on the bottom edge to ground the bird. 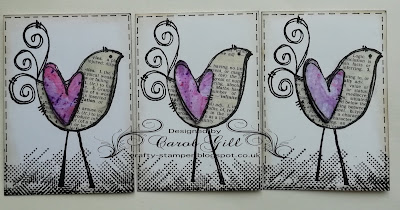 Morning and today I am GDT at Try it On Tuesday where the challenge is "In My Garden Is......"
In my garden is---lots of flowers and Bees,the flower is from LeBlanche and the little Bee from Chocolate Baroque-I paper pieced with book pages and a little promarkers on leaves and Bees-the card was smooched through distress ink for the background and sentiment from Visible Image was stamped on offcut-the stamp used to ground the flower was a craft mag freebie. 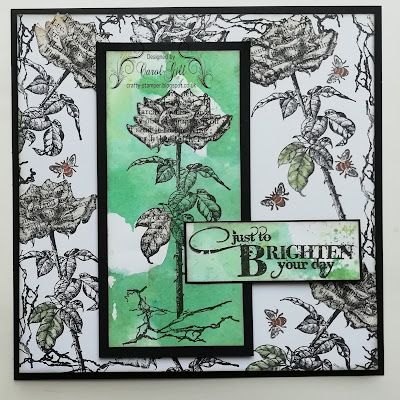 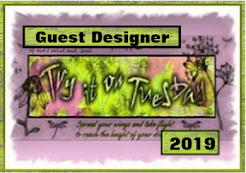 I would just like to say a heartfelt thank you for all the lovely best wishes and comments on my last post and e,mails-I have a few scheduled posts until the the middle of next month but all your lovely comments were much appreciated and have been catching up with comments to occupy my mind.
I am sharing some pics of Hollys decorated container she made a couple of weeks ago using craft mag freebie stamps and coloured with pencil.She made it for her Nanna Kazs dog Murphy and filled it with dog treats. 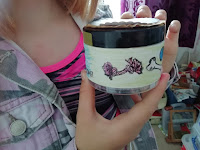 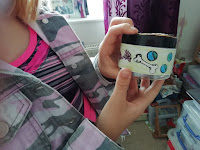 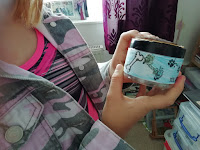 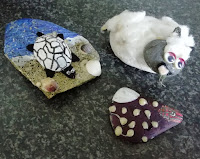 Well where to start in three days we have had our world ripped apart -some of you already knew hubby was diagnosed with Altzhiemers and Vascular Dementia two years ago but has had some worrying symtoms for the past well almost a year but things came to a head last Thursday and had some tests-Monday Dr rang with some results and he now has to be tested for bowel cancer next week.
A couple pf months ago our daughter had a breakdown and is now under the Mental Health Team-she rang Wednesday evening in tears after a visit to the Dr who found three lumps and an invertation in one of her breasts and would you believe both of their appointments are to the same hospital in the same morning.

I have quite a few DT cards already made and a few play makes up until middle of next month so see where we go from there---I am trying to keep up with my DTs and blogging as long as I can if only for my own sanity---and will comment as much as I can-but if I should disappear for a while -hopefully not- you know why.
Back in a couple of days
Carol x x
Posted by crafty-stamper at 16:59 43 comments:

I have a birthday card to share and a first for me a peek-a-boo card using an up to now unused stamp set from LC Designs.As I am rubbish at colouring animals I stamped then paper pieced(which TBH may have been the wrong paper!!!),stitched square dies from The Works stamped sentiment a craft mag freebie and done.The outer frame is in 3-D foam pads. 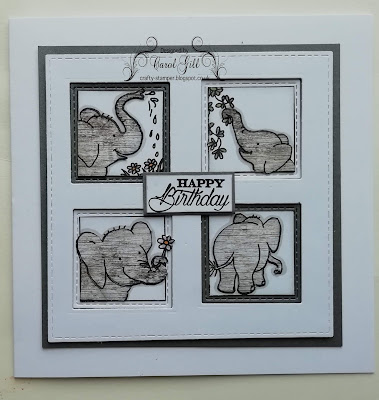 Morning and first of all would like to welcome my new followers.

We have a new ATG challenge at Colour Crazy and as our sponsor is ADFD I used Paint Palette coloured with my neglected Cosmic Shimmer metallic watercolours.The stamped brushes and stamped paint tubes are from IndigoBlu and coloured with promarkers,the tubes and palette were fussy cut and put onto 3-D foam pads and put onto a paint swiped ATC.Hope you find the time to join us but don't forget your image must be hand coloured. 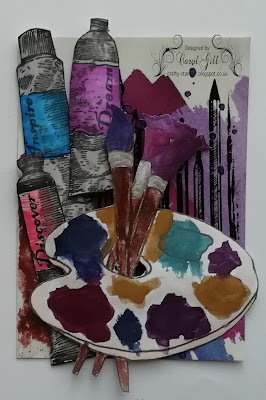 Morning and we have a new "Fully Loaded or CAS" challenge at Unicorn.I went with CAS and made a postcard for a FB swap too.I used a new stamp from LaBlanche coloured with promarkers and the stamped sentiment is from Cas-ual Fridays -faux stitching round the edges and done. 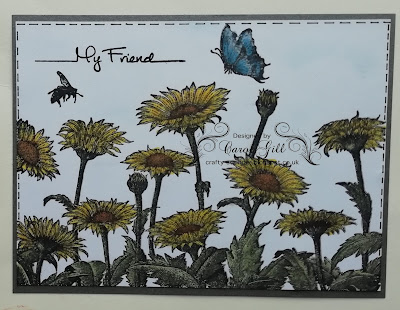 Morning and I have two DT posts today the second one is for the ATG challenge at Get Creative-as we are sponsored by Oddball Art---Starstampz and Drawn by Christa and Chubby Mermaid I used the beautiful image
"Fairy Hair Girl" by Chubby Mermaid.
I printed the image in two sizes then decided to use both-coloured with promarkers and added glossy accents,B,paper was oddment from stash,lesf die from The Worksand foam flower was one of many I was sent as a gift-Thank you Monika. 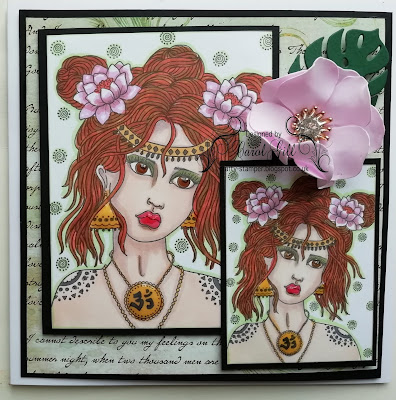 Morning and I have two DT posts today the first one is for the Summer challenge at Daisy Chain.
I made a journal page scraps of book pages,sprays,texture paste through TH and That's Crafty stencils,gold leaf pages stuck down randomly,script stamp and flower stamp paper pieced with book page scraps,glossy accents on the Bee wings which was an image from a rice paper sheet from Imagination Crafts and the Summer definition was cut from a dictionary. 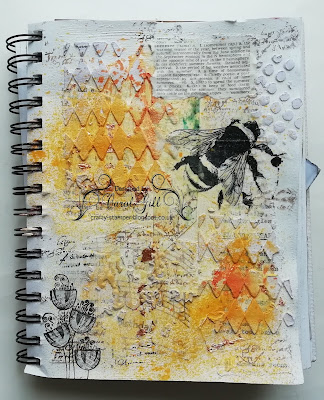 Morning and we have a new ATG/Make or Decorate a Container at 613 Avenue Create twist suggested by Chana.
I made a tissue box cover simple right? WRONG made three different lids before I managed to make it fit ??? I blame my embossing board for the score lines lol.Then I used pink B.paper and flowers-a big no no to start again and satisfied with this one lol.
The papers are from The Works,dies from Spellbinders and Creative Dies,I heat embossed the Chocolate Baroque Bee.
TOP--- 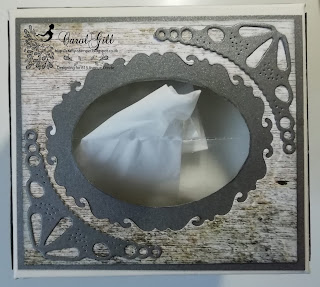 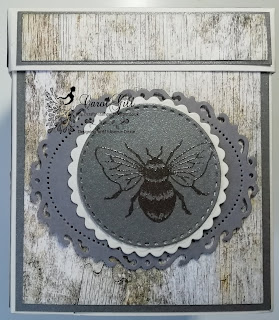 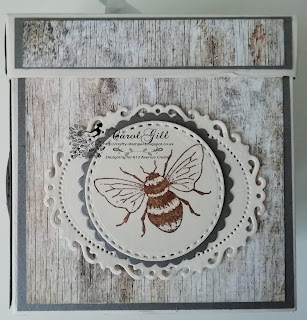 Morning and we have a new "Summer" challenge starting at CCC Digi Creations sponsored by LeAnns World and I used the cute image Snorkling Sandie coloured with promarkers and doodled round the edges.
Papers are all oddmesnt from stash and the stamped sentiments were gifted. 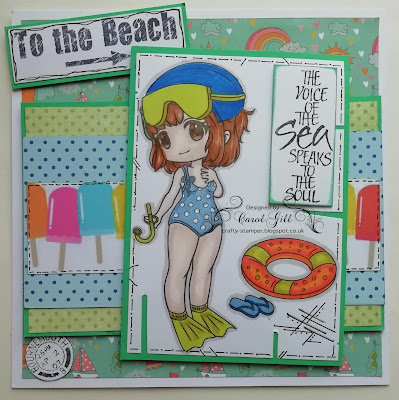 Morning and my second post is for the ATG challenge at Simply Create Too and I used a stamp set from Pink Ink.
The background was smooshed with distress inks,the images were stamped and heat embossed,coloured with promarkers and added glossy accents.The stamped foliage also from the set were stamped and fussy cut and my favourite texture stamp round the edges. 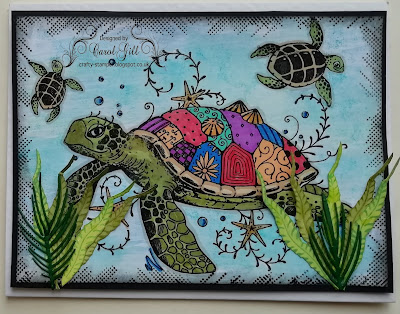 Pretty as a Picture(Shaker Style)

Morning and I have two posts today-the first one is using Dahlias Blooms from Digi Doodles coloured with promarkers and I made another shaker card.
B.paper/peel offs and frame cut from a B.paper all from stash,the sentiment was computer generated in Dafont and I harvested seeds from the garden(Grandmas Nightcaps flowers)and mica flakes in the shaker frame. 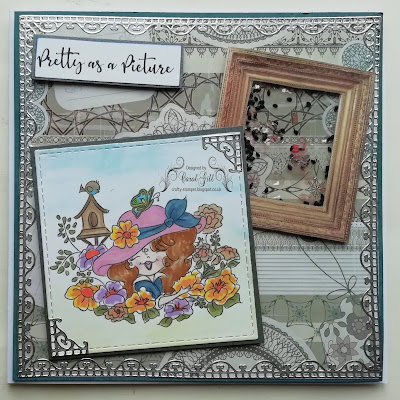 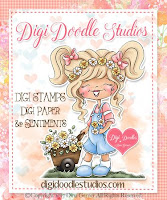 Rose and A Sunburst

Morning and as we are at the beginning of another new month I have two DT posts today the second one is for the ATG challenge at Love To Craft.I also have a private challenge with a craft buddy challenging each other to make something we haven't made before and this challenge was to make a sunburst card.I downloaded a template from you-tube and found it so fiddly so---never made one before-this is my first and probably my last attempt lol-although never say never!
The rose stamp is from Honey Doo Crafts coloured with promarkers and fussy cutthe chipboard love,plastic oblong embellishment and all oddments of papers from stash. 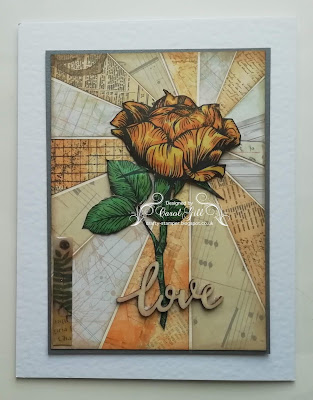 Morning and August already!!!I have two DT posts today the first one is for the "Beginning With B" challenge at Pearly Sparkles.
I made a card using a Birthday Cake/Bow and Berries.I used kraft cardoddment of B.paper and string from stash.Stitched circle and scalloped circle dies are from Creative Dies,cake/berries and sentiment are craft mag freebie stamps,coloured with promarkers and added glossy accents. 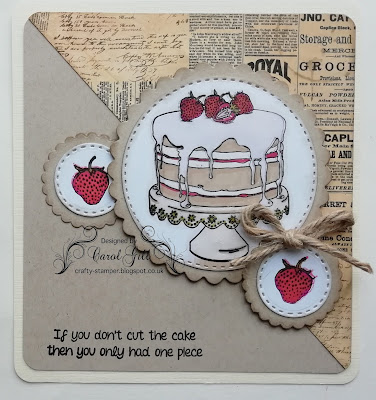 Delighted to Design For- 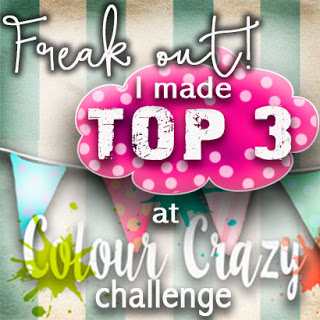 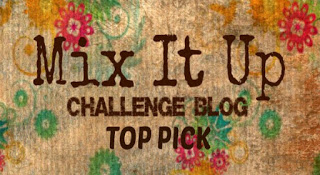 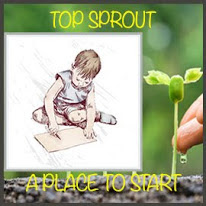 crafty-stamper
kingston upon hull, United Kingdom
My name is Carol and have been married to John for a lifetime well since 1969 anyway.I have always crafted knitting,crotchet,cake decorating and now cards.We have two sons,a daughter,three grandsons and two grandaughters-also two cats, Millie and Puddlenut,Alice the dog,and 1rabbit x